Keyboard shortcuts enable us all to work more efficiently in the apps that we use every day. If you build in Visual Studio, you're likely familiar with pressing F5 to execute your code with debugging. If you're used to building in IntelliJ, you're likely familiar with pressing Shift+Shift to Search Everywhere or Alt+Enter to invoke Context Actions. Did you know there are also a host of keyboard shortcuts that you can use in Automation 360 to enable you to move more quickly through your bot building process?

Let’s breakdown some of the keyboard shortcuts you should be using and understand their benefit. Full documentation on Keyboard Shortcuts in Automation 360 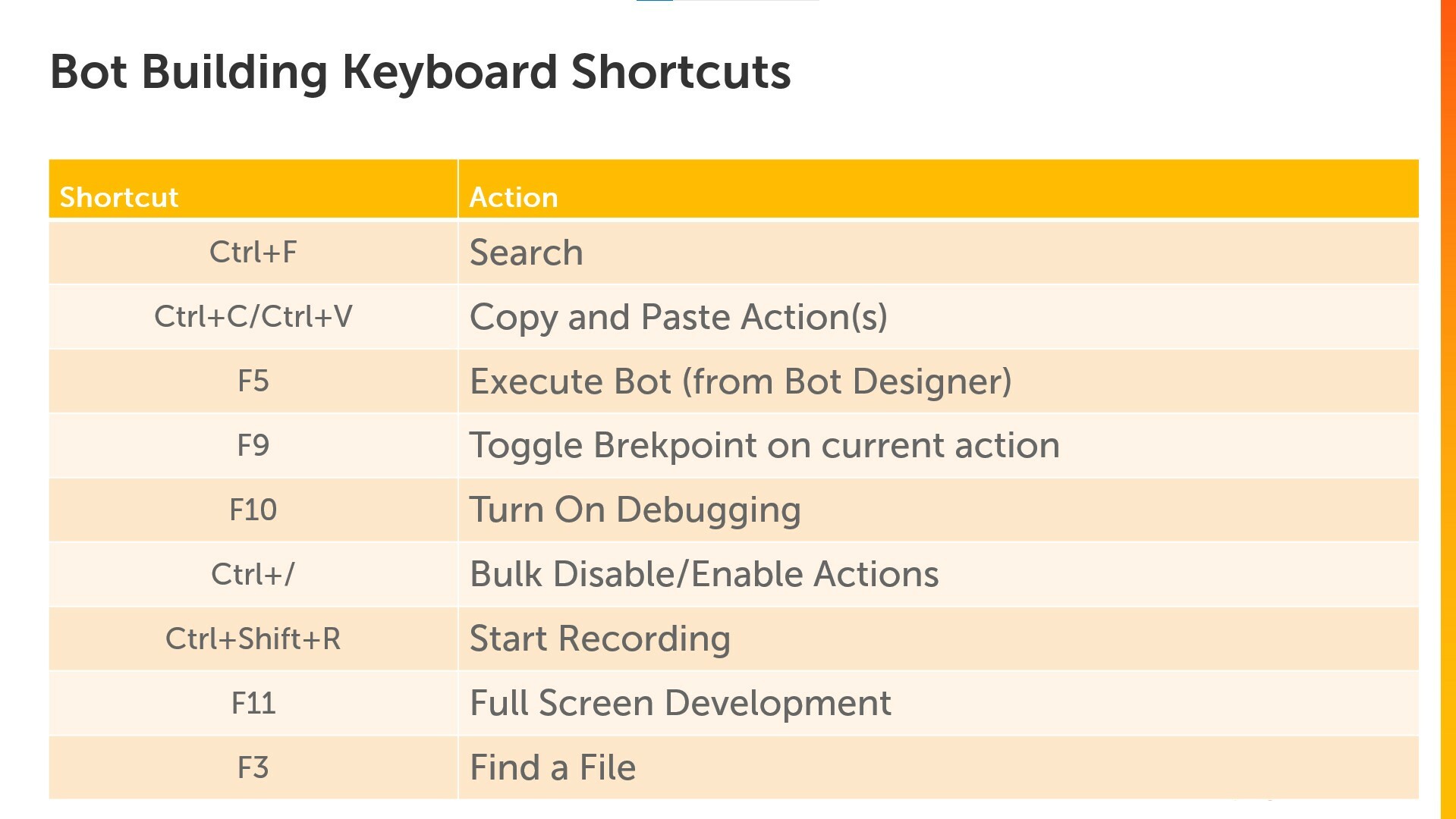 Search is technically new with the .22 release of Automation 360. Now, developers can quickly and easily find references to variables and packages/actions used by pressing Ctrl+F. The provided find window will pop up, enabling search and navigation through search results. Great if you're trying to find pesky Message boxes left in code after development is completed or for identifying where certain actions may have been used.

Copy and pasting within a bot is a great way to save time when building out logic that is similar (but maybe with a slightly different configuration) in different conditional statements. The copy and paste capabilities of Automation 360 enable you to select one or multiple actions for a copy and a paste. When pasting - note that the pasted action(s) will be placed directly below the currently highlighted action...so be sure you know the context of where you're about to paste. For copying and pasting bot actions from one bot to another, check out the copy to shared clipboard on the actions pallet.

This is the action that really started my own journey to learning more about the available keyboard shortcuts. Pressing F5 enables Run with Debugging in Visual Studio - and also works to Run/Execute your bot in the Automation 360 workbench. Note that running your bot will also automatically save it - so just an FYI in case you made some changes you hadn't wished to actually be a part of the bot before executing.

Understanding the appropriate way to debug a bot is a skill that many RPA developers lack - but not those who are consistently reading Dev Portal content! For those unfamiliar with debugging and breakpoints - a breakpoint will cause a "break" in your logic at the identified line(s) when the bot is executed with debug mode on. This enables developers to see how variables are filled at that point in the code, step through logic that may need additional attention, or check to be sure the bot/dependent applications are behaving as expected. F9 is used to both turn on and turn off a breakpoint for any highlighted action(s).

Without debug mode turned on, any breakpoints won't have any impact on the execution of a bot's logic. WITH debug mode turned on, however, any breakpoints hit will cause bot execution to pause - enabling developers to step into or step over code as well as check how variables are being filled. Using the F10 keyboard shortcut, users can quickly toggle on and off the debugger. For more details on debugging, check out this tutorial on how to debug in Automation 360

When commenting out code <!-- is used in HTML, //  is used in Java, and // is also used in JavaScript. What do these things have in common? They all can be quickly toggled on/off by selecting one or more lines in their respective IDE by pressing Ctrl+/. In the same way, actions in the Automation 360 workbench can be highlighted, then disabled (commented out) by pressing Ctrl+/. Why do this at all? Sometimes when running a bot - either during development or testing - you don't want certain actions to execute - submitting a task, or making a commit call to a DB. In those situations, it makes sense to have certain lines disabled until the bot is ready to be promoted or when your development is done.

Automation 360's in-built recorder enables you to quickly record the steps of various tasks across Windows and web-based applications. This Recorder is especially useful when you have to fill out a number of fields in succession and don't want to set up manual Recorder: Capture actions for each one. Press Ctrl + Shift + R to invoke the recorder, select the application/window you want to record, and off you go!

Sometimes when you're building a bot, you have an idea of how it should work - and you really need to spend some time focusing on how to get all of that created within the bot editor. For those times, it's great to be able to press F11 and go into Chrome's full-screen mode so that you're more immersed in the web-based workbench, and you're able to see even more of your bot at one time on your screen. Pressing F11 again will return you to the normal browser interface when you're ready to switch to something else or start to test.

To be perfectly honest, this one will likely be used less frequently than the others - but when you're adding a subtask that needs to be called from your existing task - you can press F3 to bring up a "Search for File" interface that enables you to search for and select other bots that you want to reference in a Run Task action. Once a file is selected, a Run Task action is added directly below whichever action you'd previously highlighted in the development workbench - ready for configuration and the mapping of values (should any input/output values be defined in the selected task).