I have a supporting script (PowerShell) that is called by an A360 automation by invoking the PowerShell interpreter and passing it a variable that contains the path to the script file. The script file is currently deployed manually between dev/model/prod regions, so I store the full path to that region's script in a credential locker. However, the script itself doesn't change between regions.

I've noticed that A360 allows me to upload an arbitrary file to my task bot folder, and I can place the script there. This will relieve the burden of deploying the script manually between regions, however, I still need to be able to store the path to the script as a variable within the bot, so that the bot can invoke the PowerShell interpreter and tell it the path to that script. How can I assign and retrieve the path to a file uploaded to and deployed from the repository as a variable from within a bot?

Have you tried "File: Copy Control Room file" command? Using this you can Download the File ( Irrespective of any extension ) during bot run. 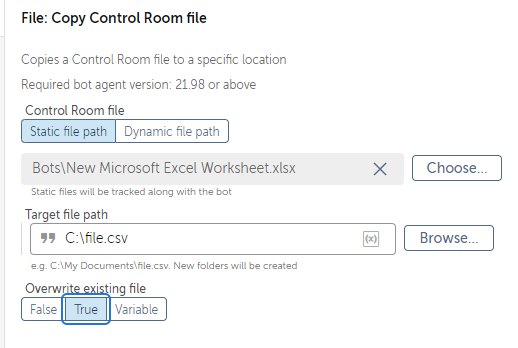 This action does not "remember" where it put the file, is that correct? So I would put the destination path in a variable, give the variable to the Download CR File action as the destination, and refer to it that way?

yes, you are right