O
Hello, We have an internal group policy to terminate idle rdp sessions after 15 minutes. This affects a bot scheduled to run every one hour as the session is always closed before the next bot run time. Any solution or workaround for this?
A
Userlevel 4

Hello @Orodje Boyikokamo​ What is the total bot execution time? And why the bot is idle for more than 15 minutes? Is it due to a noninteractive action making this idle time of 15 minutes? Can we switch to the Autologin method instead RDP if it's not a multi-user machine?

This is Dhwanit Parekh from Automation Anywhere Technical Support Team.

Can you please confirm, once the bot is kicked off every hour, how long it takes to complete ?

Does it take more than 15 mins to complete ?

Also, what approach do you use to deploy the bot via schedule ? is it Auto Log in OR RDP based deployment ?

Hi Dhwanit, the bot takes between 8-10 mins to run and it is an RDP based deployment.

Hi Sajith, the bot runs in 8-10 mins and is idle until the next run time which is one hour apart. Can you explain a little bit about the Autologin method as I'm not quite familiar with it. I'm still taking AA training courses.

Hello @Orodje Boyikokamo​ , If the bot execution completes in 10 minutes, then how does the idle timeout of 15 min will impact the Bot run ? Have you faced any issues due to this idle timeout issue?

There are two methods for unattended bot execution,

For Autologin, it has to be a Single Runner machine for wich the Users console will be taken for Bot execution. If you go to Control Room > Device > Edit the device > Goto Deployment tab, there are two options, Single user and Multiple users. Single user and regular meant for Autologin and Mutiple users and RDP selections are meant for RDP based deployment. 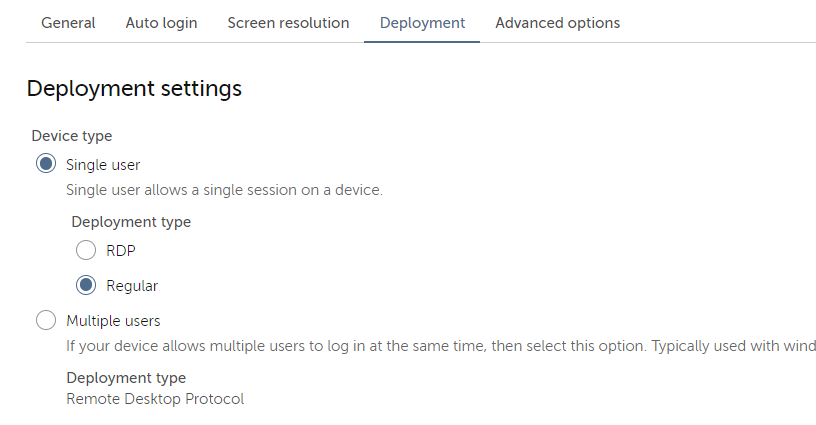 RDP Based deployments are usually used in a multi-user machines where the Terminal license is configured to login multiple users to the same VM at a time.

Hi Sajith, the first run is normally successful but the rdp session is killed before the next run and causes the bot to throw an error because there's no active rdp so the bot can't open GUI based applications captured with the A360 recorder. Unfortunately the machine in question is one that is frequently accessed by multiple admins hence the Auto login method is not feasible.

I am trying to understand, then how the idle timeout of 15 minutes will be a problem here?

If 1st deployment works and second deployment fails as RDP session killed, it could be due to Auto-Login settings where bot is unable to create new session.

We can choose option: Reuse an existing session, if available