I have two excel sheet (one is for keeping the mapping and other is workbook to be worked on). My requirement is to populate the column of workbook excel based on the values stored in mapping excel.

for respective codes (Column A). I need to populate the Column B values from mapping excel to Column C in workbook excel depending on the code (Column

Any suggestion on achieving the same?

@Rohit Gaurav​ You've probably realised you cannot join two workbooks together, although you can join sheets together in the same workbook.

My approach here to make it set based, rather than row by row, would be to add the mapping data to your target sheet and then running and update query where you join the sheets together 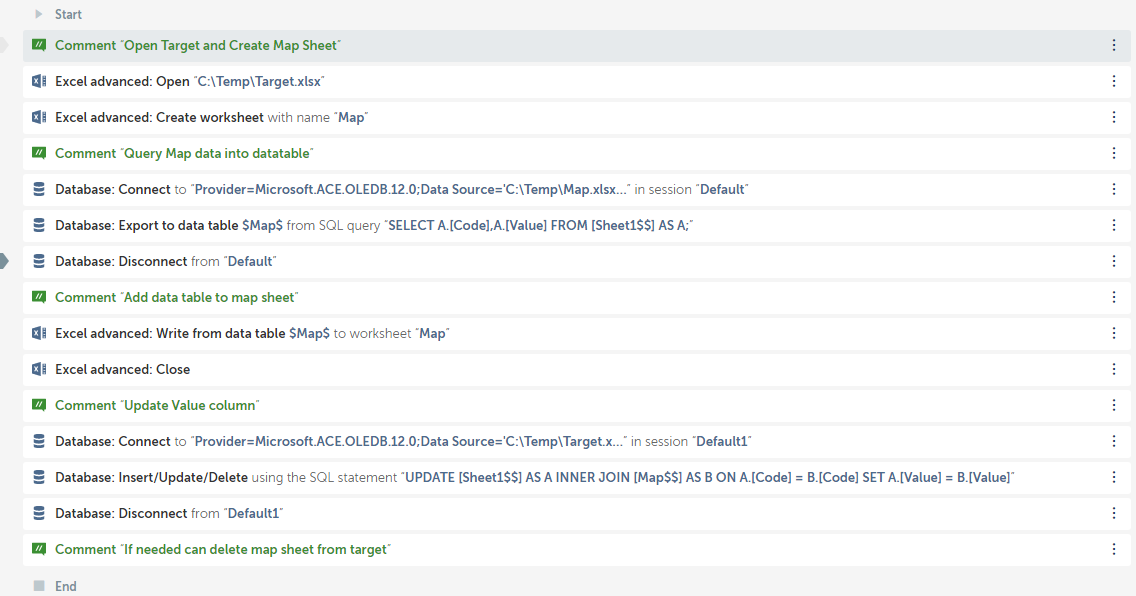 Then after exporting that as a datatable and using excel package to add to your target workbook, you can connect to the target and run query similar to this

You can then remove the mapping sheet if needed.

A bit verbose, but if you have lots of rows to map etc. it should perform quite well compared to lots of loops

@Paul Hawkins​ - Thank you for this, it works perfectly fine!!

@Andoni Aguirre Aranguren​ It is quite difficult to find good documentation on the syntax used when querying excel with SQL. I've picked few bits up over the years when trying to write more complex queries.

By and large the basics are the same as other SQL DB engines, but there are differences in some of the functions and is also much more limited in what you can do. It does has a lot of similarities with MS Access queries though.

For example, functions like CASE in SQL SERVER, the equivalent is IIF etc.

You can do a lot though, like in the case above you could use DROP TABLE to delete the sheet out of the workbook.

Thanks for answering. You are 100% right, I struggle a lot to find comprehensive documentation for using these queries in this scenario. I do the queries first access db (I create tables there and import excel data with the excel files involved) and from there I google a lot I guess...

Regarding to the last point you mention (DROP TABLE), as far as I know that won't delete the sheet itself from the workbook (it'll only delete the content from the sheet, leaving the sheet blank)

@Andoni Aguirre Aranguren​  You're absolutely right! It's been a while since I last tried so just did a test to check and the sheet remained with data deleted. Must say since the v11 days I've been using some custom libraries for these sorts of actions instead.

@Paul Hawkins​ That documentation is definitely a great asset (I was not aware of it!).

In regards to what it says:

Fyi, as far as I'm aware, the driver version that I'm using is 12.0 and the same issue happens (worksheet is not deleted) 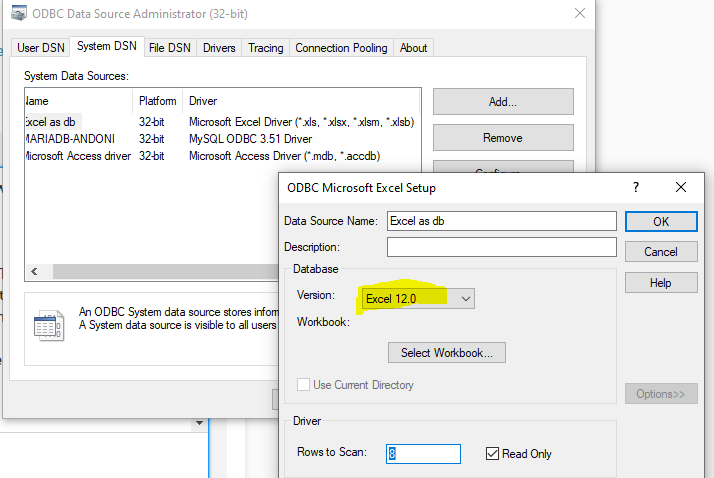 Thanks for the info, cheers!

@Andoni Aguirre Aranguren​ Yes, on first reading I thought too maybe it only applied to .xls extensions, so tried with higher on a xlsx and saw same behaviour.